In my last blog, I talked about several reasons that it’s a good idea to leave that music player at home when you run. As I promised, I’m here now to talk about another reason:

You won’t be so aware of the sound—and feel—of your own footsteps.

Why does this matter? 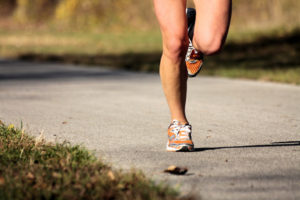 Just as you know whether you’re right- or left-handed, you probably also know that one of your feet is very slightly larger than the other. This is your dominant foot. For me it’s my right foot, so when I’m buying any kind of shoes, that foot has to be comfortable in the shoe or it’s no sale.

You may not be aware that you have a dominant leg too. And believe it or not, this is where the listening part comes in. (My thanks to Malcolm Balk for this insight.)

Here’s an experiment you can try:

The next time you run—without the music player—start off at your usual pace, and give a little extra attention to your gait—how you run—and the sound of your footsteps. Most likely, you’ll notice that your dominant foot lands slightly louder and harder than the other one: ONE-two, ONE-two, ONE-two, almost like a march, with the downbeat always on the same foot.

If you have trouble figuring out which is your dominant foot, try running on a treadmill—you should be able to hear it pretty easily.

This ONE-two, ONE-two goes on for however long your run is, 3 miles or 20 miles. It also puts a lot of uneven, unnecessary stress on your feet, legs, and back. That hurts!

You might ask, “How can I help how I run? It’s just my natural gait.” Actually, you can help your legs and feet—by using your ears and your sense of rhythm.

We humans are creatures of habit. This is one reason that rhythm is so important to us. A steady beat can be very reassuring, in music, dancing, walking, or running. But it can also get to be too much of a habit if we don’t shake things up now and then.

Since we have only two feet, this triple rhythm means that the stress falls on alternate feet: RIGHT-left-right, LEFT-right-left, and so on. This might take a bit of getting used to, but I urge you to give it a try. Once you get used to it, see if you can ease your shoulders into settling down, too. It might even make those long runs more interesting.

Do I hear a waltz?