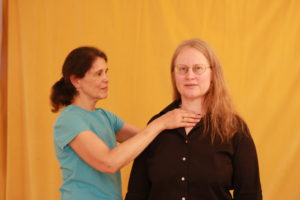 I first heard about Alexander Technique when I was studying piano at Manhattan School of Music. A student who’d already graduated came to my piano teacher’s studio and played a piece by Bach. He was an excellent pianist, but he seemed to be putting a lot of physical effort into playing and looked almost uncomfortable at the piano.

Two years later, the same graduate came back to school and played the same Bach piece again. The contrast couldn’t have been more dramatic. This time, he was almost dancing on the piano bench! The sheer joy that had been missing from the music earlier was overflowing from him this time.

One of my classmates mentioned that the graduate had been studying Alexander Technique. I’d never heard of it before, and I assumed that it involved some kind of technical exercises for really advanced pianists. So I promptly forgot all about it.

After Manhattan School, I worked for several decades as an editor in the textbook-publishing industry. I was so intent on editing manuscripts that I forgot my mind was attached to my body! Eventually I ended up with repetitive-stress injuries in my wrists and elbows.

After I was laid off from my last in-house job, I set up as a freelance editor. Working at home gave me enough time to join a gym and discover the joy of physical activity. Before this, I had thought sports were only for other people, not me. To my surprise, I enjoyed yoga and strength training with weights, but running became my great passion.

I quickly realized that I was much happier being active than sitting for hours, hunched over a desk. But over time, back pain and running injuries interfered with my physical activities. This was also when my repetitive-stress problems came up. When you work for yourself, the office never closes.

I discovered that one of my yoga teachers at the gym also taught Alexander Technique. I remembered my listening experience at Manhattan School, but I still had only a vague idea of what it was. I’d already done a lot of physical therapy, so I thought maybe Alexander Technique was similar to that.

I started taking lessons with my yoga teacher. It was nothing like what I had imagined. In fact, it was much better!

During the first part of a lesson, with her words and skillful, gentle hands, my teacher guided me through ordinary activities—walking, writing, and so on. I discovered that I didn’t let my knees bend when I walked, that I gripped the pen or pencil when I wrote, and that I hunched over my desk when I was working. With my teacher’s help, I learned to sense and undo a lot of this tension.

For the second part of the lesson, my teacher had me lie down on a massage table with support (a couple of books) under my head. Again, with words and gentle hands, she showed me how I could let go of the muscle tension I didn’t need.

The biggest benefit of my lessons was learning that I didn’t need to tie myself up in knots to do anything—from working to cooking to running. Eventually I realized that my teacher was training me to think this way for myself, away from lessons. I found this new way of thinking—and living—so rewarding that I wanted to help other people make these positive changes in their own lives. My teacher encouraged me to become an Alexander Technique teacher myself.

I enrolled in the three-year, sixteen-hundred-hour training program at the American Center for the Alexander Technique in New York City. The training program taught me more than I could have imagined. My movements became lighter and freer. I overcame old and uncomfortable habits of moving. Even better, I overcame old patterns of negative thinking. I left classes feeling renewed, refreshed, and confident.

My running also improved dramatically. Running while studying Alexander Technique gave me the mental and physical stamina to fulfill one of my greatest dreams: I finished the New York City marathon in 2007.

The Technique has also helped me with injuries. I broke my right foot when I was halfway through my training. Working with my teachers and classmates helped me get through ten weeks with crutches, a cast, and a boot. Later it helped me during physical therapy and in learning to walk and then run again.

I gained my national certification as a teacher in June 2009. Since then, I have taught new and continuing students in New York City.

My doctor discovered that my lower-back pain was due to arthritis. Through natural wear and tear, the arthritis caused spinal stenosis, the narrowing of the canal through which the spinal cord and nerves travel. At least one doctor advised surgery to relieve it. My work with the Alexander Technique—as a student, teacher trainee and teacher—played an important part in my being able to postpone surgery for a number of years before the arthritis went from annoying to acute to severe.

In March 2011, I had back surgery for spinal fusion in two places in my lumbar spine. The Alexander Technique helped immensely in my recovery. After the surgery, I had to contend with muscle stiffness and soreness as well as restricted movements (no bending, twisting, or heavy lifting). Instead of forcing my stiff muscles to move, I gave myself time to think about how I was going to stand, sit, or walk. The decrease in muscle tension also allowed my breathing to become fuller and more easeful. This helped me get over the effects of the anesthetic much more quickly.

I also hold a bachelor of arts degree in social sciences and music (double major) from Fordham University, as well as a bachelor of music (piano) from Manhattan School of Music.